Cape Cod Trout Unlimited selects one individual each year that has made significant contributions to the chapter. This CCTU member has been active in the chapter for at least 5 years. The award, pictured below, is presented at the Spring Banquet. 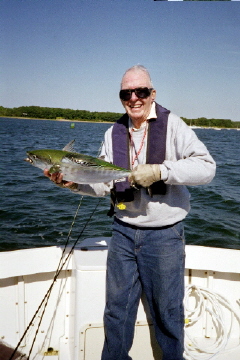 Jack had two recreational passions: fishing and flying.  As a businessman he managed to incorporate both into his work at the S.D. Warren Paper Company, where he was Vice President of Sales.  He loved to take corporate clients on fishing trips all over the U.S. and Canada, providing their transportation in his Mooney airplane and introducing them to his favorite fishing spots.  After he retired in 1984 he no longer had the plane, but his passion for flying and fishing remained.  He was a committed proponent of catch-and-release fishing, and his idea of pure pleasure was “a great day on the water,” whether he actually caught anything or not.  Fishing brought so much pleasure into his life that one of his greatest joys was teaching other people, especially young people, to share his passion for this wonderful sport.  Establishing this scholarship in his name is a fitting memorial to Jack, who heartily endorsed CCTU’s mission to teach not only the techniques but the joy of fly fishing.

Please send a donation to continue this ongoing program to allow a youth to attend our annual fly fishing school.

Donations can be sent to:

See the Fly Fishing School page for info on the school.